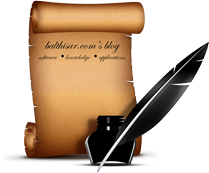 I’m Jim Derry of balthisar.com, and now I have a blog. You’re reading part of that blog now. Or you’re reading some content aggregator’s website. Hopefully you’re at the blog and not someone’s website, though. The story about why I (finally) have a blog is a bit long, and as I currently have your attention I will be happy to relate it to you.

It all began last year on reddit. Some commenter told me that balthisar.com looked like a Geocities site from the 1990s. I mean, c’mon, it wasn’t that bad! Still, the site hadn’t been significantly updated since George W. was president, and it turned out that the two cool pieces of software that I give away for free also no longer worked on modern operating systems. So it was time to clean house.

At first I wanted to start with the website. When I first redesigned it in 2005 I made it a point to build it from an architecture and using standards that would make it really, really easy to significantly update in the future. I could spend a day writing a new skin and then invest my time figuring out why Cascade wouldn’t run in Windows 8 and why Tidy crashes on Mac OS X.

But the update wasn’t easy, because two major things happened that affected the humble goal: web browser makers actually decided that “web standards” should really mean something, and Apple introduced the iPhone which suddenly meant everything had to be designed for mobile.

Now unless you’re a software developer (including if you’re a hobbyist, like me) you might not know what it means to hand-code something. Aside from the architecture I mentioned (developers: it’s CakePHP 2.4 framework), all of balthisar.com is painstakingly hand-coded. This means that I learned a lot about modern web standards, and learned a lot more about modern web programming than ever before. I learned most of this from other people.

When people are generous and share, it inspires me to do the same. And because balthisar.com has always prided itself on sharing helpful knowledge, adding a blog seemed like a natural addition to the website in order to share information and knowledge on a more informal, spontaneous basis.

Still, I didn’t want to become a “blogger.” I already have a fulfilling career. And I didn’t want to migrate the site that I rewrote from the ground up to a content management system. All the same, I realized I would need to make it easy to post articles, lest I succumb to laziness and not write anything at all. And so I put the idea of a blog on the back burner, finished the redesign of balthisar.com, and made significant changes to Balthisar Tidy for modern Mac OS X.

Revisiting Balthisar Tidy was like revisiting my website. Cocoa and Mac OS X hadn’t remained static. And it wasn’t a matter of a few deprecated APIs. The language itself had changed considerably. There was a lot of stuff to unlearn and then relearn. And this learning curve counted on a lot of nice people who shared their experiences, inspiring me to do same.

Today this desire to pay it forward has resulted in finally launching balthisar.com’s blog. Stay tuned. There will be a lot more to follow.